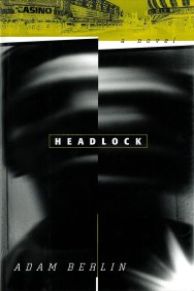 Odessa Rose has a violent temper and a wrestler’s strength, both inherited from his Russian immigrant grandfather, having skipped the generation of his father, an economics professor. After violently attacking an opponent and losing his wrestling scholarship, Dess moves to New York City where he parks cars for a living by day and seeks bar fights by night. Enter Gary Rose. Grossly overweight, a professional gambler on a losing streak, Gary is the older cousin Dess and his younger brother admired as kids. The family misfits team up for a road trip from New York to Las Vegas—Gary needs to win back gambling debts or suffer professional maiming, so he brings Dess along to count cards, but also for protection.

Dess’s uncontrolled anger and Gary’s uncontrolled appetites add to the tension of an American road trip, which is really about family bonds, self-examination and redemption.

“Headlock is a book with a split personality; it occupies fractured territory between family drama and noir.”

“Berlin’s is a strong voice that speaks knowledgeably of the conflicts of masculinity…Headlock is a well-paced, insightful novel that makes its point in a compelling and literary way.”

“Berlin displays a quirky sense of dialogue…etched with convincing detail.”

“A satisfying mix of thriller, road novel and family drama.  The prose is tight and incisive, and Berlin has a way of getting inside the heads of his main characters.”