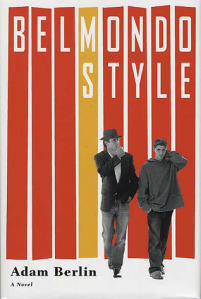 Jared Chiziver is a single father and professional pick-pocket, devotee of Jean-Paul Belmondo and foreign films, and a suave ladies’ man. His son Ben is sixteen, a bookish semi-introvert, a star on his school’s track team, college bound and gay. Their unusual but quiet and affectionate life in New York City’s Greenwich Village is ripped asunder by two singular events. First, Jared finally meets ‘the one,’ Anna, a photographer of criminals and death scenes – a woman he finds endless engaging. Second, in response to a brutal attack upon his son Ben, Jared breaks his own cardinal rule and commits the big crime, the one that draws the unflinching attention of the police. The only response possible to these events is to leave New York one step ahead of the police and embark upon a journey of both escape and discovery that will irrevocably change their lives.

Told from the point of view of the too-wise and too-adult Ben, Belmondo Style is an unforgettable tale which movingly explores the bonds between an unusual father and a remarkable son.

“Berlin follows Headlock with another stylish, atmospheric tale, this time about a single father who is a professional pickpocket and his bookish teenage son…With its macho staccato language and riveting characters, this novel is all about mood and motion.”

“Berlin offers another skillful tale of two closely bonded males, this time a single father and his 16-year-old son. Living in Manhattan, on Bedford Street in the West Village, Jared Chiziver makes his living as a pickpocket, and one par excellence. He’s not only good enough never to have been caught, but good enough to provide for himself and his son Ben. This premise of an alternative and unusual life in the big city is filled with possibility and is well handled indeed by Berlin.”

“You’ll be dazzled by this tough, elegant, touching love story about a criminal father and his outcast son.  Belmondo Style is a very rare thing indeed: a dark and violent novel punctuated by flashes of unexpected, incredible joy.”

— Paul Russell, author of Boys of Life and War Against the Animals

“A father and son with an unusually close relationship wrestle with a hardscrabble life in Manhattan and the consequences of crime…this sharp, simmering sophomore effort feels like the calm before the storm.”